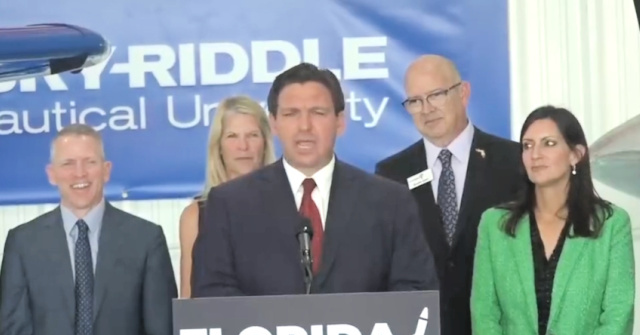 Gov. Ron DeSantis (R) said he is perplexed to see President Biden scrambling to get his Cabinet together due to migrants being sent to a “wealthy, rich sanctuary enclave,” highlighting the hypocrisy of the elites who already shipped the migrants, who they claim to care about, away “within 48 hours.”

The far left experienced a collective freakout on Wednesday after learning that the DeSantis administration had sent dozens of migrants to the Obamas’ favorite vacation spot, Martha’s Vineyard — a proposal he floated over six months ago. The pearl-clutching reaction from those who champion sanctuary policies made national headlines — arguably more than other issues related to the border, from fentanyl overdoses to the impact of illegal alien crime on small communities.

DeSantis said he was “a little bit perplexed” to hear that President Biden is “scrambling to get his Cabinet together to try to address the fact that you have governors who are helping to relocate illegal aliens to sanctuary cities.” Oddly, DeSantis continued, Biden has not shown such urgency for other issues.

Biden did not “scramble” to get his Cabinet together, the governor said, “when we had millions of people illegally pouring across the southern border,” adding:

He didn’t scramble to get his cabinet together when you had 43, 53 migrants die in some trailer in Texas because they were neglected by the federal government. You didn’t see him scrambled to get his Cabinet together when we had Americans that were victimized by criminal aliens that you had across the border.

“You didn’t see him scrambling to get his Cabinet together when we hit record fentanyl deaths, which that fentanyl is coming across his open border. It’s only when you have 50 illegal aliens end up in a very wealthy rich sanctuary enclave that he decides to scramble on this,” he continued, making it clear that his administration aims to “insulate” the Sunshine State from Biden’s policies:

And yes, that involves helping with transport. It involves suing on catch and release, which we have done. It’s involved in making sure that contractors are held accountable if they’re …. facilitating this into our state, and we have a statewide grand jury that’s looking at different types of practices that may be going on the state that’s exacerbating the problem. And so at the end of the day, this is a massive policy failure by the president. This is a massive and intentional policy that is causing huge amount of damage all across the country. And it’s all rooted in a failure to take care that the laws are faithfully executed and to fulfill his oath of office.

“And so instead of scrambling and worrying about a bunch of rich people, and having 50–  and oh, by the way, they already bussed them out. They’re gone,” DeSantis continued, pointing to the sheer hypocrisy of the leftists who claim to have hearts for displaced migrants.

“They said we want everyone, no one’s illegal, and they’re gone within 48 hours,” he said.

Indeed, the elites on Martha’s Vineyard deported the migrants that they claim to care about within 48 hours of receiving them, yet they still patted themselves on the back for supposedly aiding the migrants. It does not appear that any of the wealthy elite homeowners on the sanctuary island offered their homes to the migrants — not even the Obamas, who own a multimillion-dollar estate:

Buses have arrived in Edgartown to transport migrants from St. Andrew’s Parish House.

There is one big bus and two shorter buses to transport folks off the island. People with bags are taking selfies and hugging volunteers goodbye pic.twitter.com/wuauiZM4Y3

“And so why not actually look at what’s going on,” he continued, pointing out that there were more corporate journalists in Martha’s Vineyard today “than I’ve ever gone down to the southern border to look what’s going on. ”

“Why don’t you go down there and look with some of those communities have to deal with every day,” he suggested.

Indeed, the dozens of migrants shipped to the elite island generated significant outrage and chatter from the open borders left, yet, as Breitbart News reported, they account for 0.001 percent of President Biden’s border crisis.

No comments to show.

Kanye West: ‘A Majority of Media Have a Godless Agenda’

Kanye West: ‘They Threatened My Life’ for Wearing a Trump Hat

Kanye West: ‘I’m Pro-Life,’ ‘I Care About the Fact that There’s More Black Babies Aborted than Being Born in New York City’