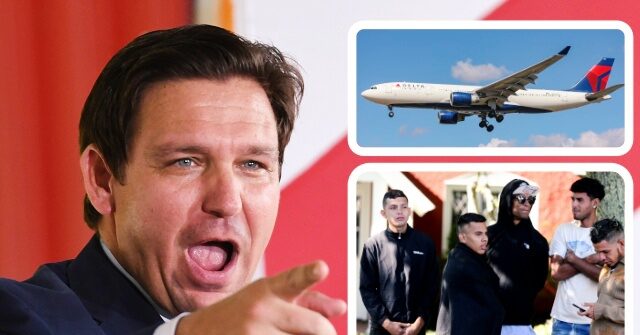 During a press conference last week, DeSantis vowed to Floridians that he will send more flights of illegal aliens to the homes of the Democrat party’s wealthiest communities.

“Now we see, in New York and D.C., they used to beat their chests when Trump was in office, saying they are sanctuary jurisdictions,” DeSantis said. “Then the minute Texas starts busing there, they get very bent out of shape about it.”

“These are just the beginning efforts,” DeSantis continued. “We got an infrastructure in place now. There is going to be a lot more that’s happening.”

The remarks came after DeSantis sent 50 illegal aliens to the elite coastal island of Martha’s Vineyard — which voted up to 84 percent for President Joe Biden. Officials on the island quickly declared a “humanitarian crisis” and the illegal aliens were swiftly deported on buses to Joint Base Cape Cod.

Martha’s Vineyard is home to former President Obama’s vacation estate, which boasts 29 acres and seven bedrooms, and a Breitbart News analysis finds that up to six million border crossers and illegal aliens could be housed on the island.

Most of the estates on Martha’s Vineyard, including the Obamas’, are empty except during the summer months and could double as housing for border crossers, illegal aliens, and newly arrived refugees.

Even as Biden has helped transport over a million border crossers and illegal aliens into working and middle class towns since taking office, the White House is reportedly considering litigation against DeSantis and other Republican governors for moving illegal aliens out of their states.

Likewise, a number of lawyers working with some of the illegal aliens flown to Martha’s Vineyard are suggesting the Department of Justice (DOJ) open a criminal probe into DeSantis and other Republican governors carrying out similar operations.

John Binder is a reporter for Breitbart News. Email him at jbinder@breitbart.com. Follow him on Twitter here.

No comments to show.

Kanye West: ‘A Majority of Media Have a Godless Agenda’

Kanye West: ‘They Threatened My Life’ for Wearing a Trump Hat

Kanye West: ‘I’m Pro-Life,’ ‘I Care About the Fact that There’s More Black Babies Aborted than Being Born in New York City’